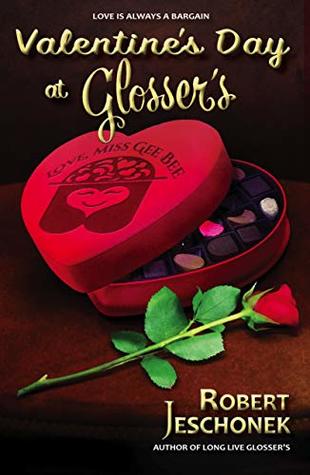 The story is part of a series that revolves around the Glosser Brothers department store chain from western Pennsylvania.  In this installment, the store is holding a Valentine’s poetry contest, which brings together the two store “mascots,” nicknamed Miss Gee Bee and Glossy, to act as judges.  Their journey together to find the best writer takes them through several ice cream sundaes, a lot of bad poetry, and one important secret.

I actually listened to the audiobook version of this because the narrator is a relative of mine.  I thought she did a great job, especially with the distinct voices of several minor characters.  It was a great way to pass my commute, starting off my day with a smile.  It’s a quick little story, so you could also read it in a evening curled up on the couch with some chocolate.

What are you guys reading for Valentine’s Day?

B and I started off the day by making some waffles with my new Death Star waffle maker that he bought me for me birthday last month.  They came out really well!  You can get your own waffle maker from ThinkGeek. 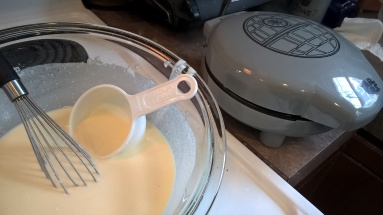 Close up of the laser cone thingy

I splurged and got real maple syrup for the occasion–the good stuff is easy to find here in Ohio, especially starting around this time of year.

After dinner we went to see Deadpool, which was just as hilarious and irreverent as we expected.  I was really pleased with it, and I’m glad it did so well at the box office, too.  I think it’s a win for the fans.

I am generally not a fan of commercialized holidays; my husband knows better than to buy me anything for Sweetest Day, for example.

But I actually love Valentine’s Day.  I celebrate it in a rather Japanese fashion: in Japan, women give chocolates not only to their boyfriends/husbands/boys they like, but also to their girlfriends and coworkers (the ones given to coworkers are hilariously called “obligation chocolates“–it’s very Japanese).

I love to do things like bring in cookies to work, or hand out silly kids’ Valentines, and make my husband something tasty.  And for his part, B never gets me candy on Valentine’s Day, because it tastes exactly the same several days later, when it is 3x cheaper.

This year I made him a frozen peanut butter pie.  This is one of the famous desserts at Ray’s Place in Kent.  My husband went to Kent State, and still meets some of his college buddies at Ray’s frequently.

I used this recipe, but substituted a pre-made Oreo crust with a layer of chocolate sauce between the crust and filling.  This is a pretty quick and easy pie; it’s no-bake!  Unfortunately, I put in in the freezer on Valentine’s Day when we started to make dinner, and then we forgot about it until Monday.  Too much champagne, I guess.

The last time I made this for B, I presented him with a slice, and he informed me that at Ray’s Place, they put chocolate sauce and peanuts on top.  Well, then.

To continue our unique Valentine’s Day, we also went to see Kingsman: The Secret Service over the weekend and really enjoyed it.  If you’ve ever wanted to see graphic violence be described as “beautiful,” this movie is for you. I did give a bit of an eyeroll at the end, where I think they took a joke a bit too far.  But otherwise it was quite good, and I’d highly recommend it.

I hope everyone had a great Valentine’s Day.  My husband and I made chicken parm together and watched The Avengers on Blu-ray.

I went to the store yesterday to get some cheap candy, and found these at Target:

They are going to my parents and my sister (sis, you are getting the R2).  Our family tradition is always to give each other conversation hearts for Valentine’s, and my husband happens to hate them.  So if I gave him one, I’d just end up eating them myself.

The best part is, the hearts have Star Wars sayings on them.  Instead of “Be Mine” and “Text me” they say “MTFBWY” (May the Force Be With You) and “Nerf Herder.”  It would be awesome if one said “I know.”