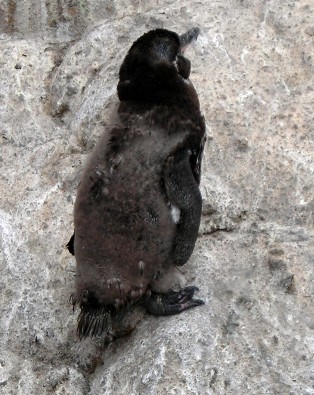 Like other birds, penguins undergo “molting,” where they shed their feathers, though penguins tend to lose them all at once, or in large patches, resulting in a rather scruffy appearance like this guy.

Galápagos penguins molt once or twice a year, and it takes a couple of weeks on average each time.  During the molt they avoid going in the water since they don’t have their nice waterproof feathers for warmth and protection. 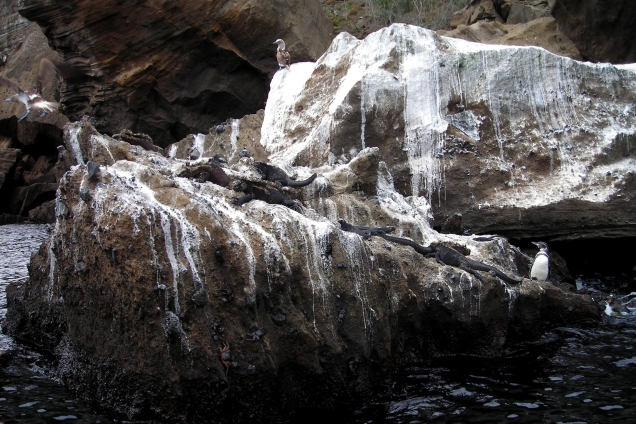 This is a picture you have to look closely at.  It is the only photo I got with this famous Galápagos trifecta: blue-footed boobies, marine iguanas, and a Galápagos penguin all in the same shot.  Our guides were very excited to point this out to us; it’s definitely a win for a phototourist in the Galápagos.

The booby is in the top center, iguanas in the mid center, and penguin in the bottom right.

My mom gave me an adorable ornament for Christmas: a bunch of festive animals on a see-saw, and you can actually turn a little crank to make the see-saw go up and down.  It’s a 2013 Hallmark ornament called “Up for fun!” 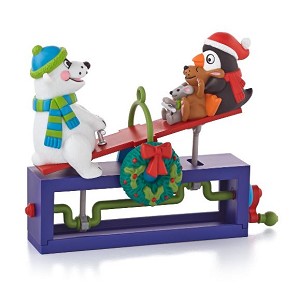 You might, then, be surprised to know that my mom only bought it for me because she knew it would push my buttons.  They have heard me complain on this topic often, so this is like a family joke at this point.

See those two larger animals on the ends?

Polar bear: lives in the Arctic.

Penguin: only found in the Southern Hemisphere (the Galápagos penguin is the only one to potentially cross the Equator, and then not by much)

These two animals NEVER MEET in the wild, and it drives me crazy when holiday stuff has them hanging out next to each other like best buds.  My family thinks this is hilarious (to be fair, it is), so they point out this stuff to me regularly.

The poem text on the ornament box even says they are hanging out at the North Pole–there are no penguins in the Arctic, let alone the North Pole!  Unless Santa has some kind of illegal menagerie.  He clearly has reindeer, but at least they are native to the region.

And what are those other two animals on the see-saw?  The smallest one is clearly a mouse (ok? cute but slightly random); I honestly thought the larger one was a kangaroo until my mom suggested it was a rabbit.  There are definitely lagomorphs in the Arctic, but that far north they are always white! WHITE! To blend in with the snow!

Now I’m picturing Santa as having some kind of Fortress of Solitude at the North Pole, like a jolly Superman.  His zoo just has holiday animals instead of intergalactic creatures.  I guess we’ve all learned something today… 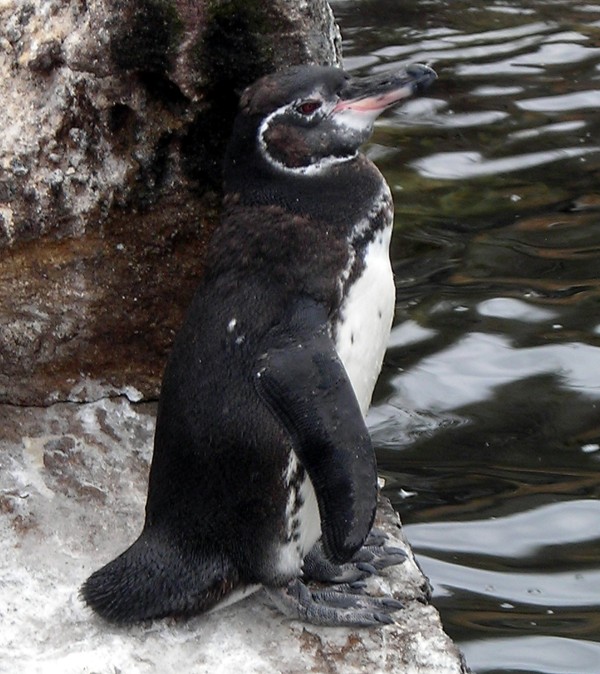 If you’ve been reading my posts, you know the Galápagos are located along the equator.  Yet they have their own endemic species of penguin!!

Galápagos penguins are the only species of penguin that may live in the Northern hemisphere.  The Humboldt and Cromwell currents keep the waters around the islands cool and full of fish to allow the penguins to live in such a “tropical” location.