I watched The Empire Strikes Back again recently, though this time it was on a big screen with the Cleveland Orchestra accompanying it live–that experience is always a pleasure.  We had left our toddler at home, but it felt like he was there with us as I watched the scene where Luke meets Yoda on Dagobah. If you are a parent or have spent any length of time around a toddler, you will likely recognize these attributes:

In the scene where Yoda is introduced, he behaves exactly like a three-year-old.  This had never occurred to me until I rewatched it as the parent of a toddler. It is interesting how being a parent sometimes gives you a new perspective on familiar things.  I was immediately reminded of my kid, who this morning screamed “MINEEEEE” about a toy car and a banana peel.

But Yoda doesn’t maintain the toddler behavior for long.  He begins to speak and act (more) normally in his hut when conversing with Obi-Wan’s spirit, and we don’t see Toddler Yoda at any other point in the movie, or any other Star Wars movie (though he does still have his quirks).  So why the act?

I had never really thought about Yoda’s extra-peculiar behavior in this scene before.  One theory is that Yoda’s quirks have become exaggerated after so many years of living in isolation on Dagobah.  But I don’t think Yoda has gone completely around the bend. I think it’s strategy.

As many parents will probably agree, I find toddlers to be the world’s greatest test of patience.  So upon meeting Luke for the first time, what better way to take his measure than go full on toddler and try to push all his buttons?  I guess I wouldn’t advise this strategy when meeting new people in real life, but I would think you can learn a lot about someone’s temperament by seeing how they interact with misbehaving children.  I’m certainly learning a lot about myself as I figure out this parenting thing.

Therefore, as soon as he concludes Luke is unsuitable (no patience, reckless, too old, as he says to Obi-Wan in the hut), he drops the act.  The test is over, and Luke has failed. Although he does change his mind and agrees to train Luke, he was correct about Luke’s temperament, which is shown when Luke rashly abandons his training to save his friends on Cloud City, only to walk into a trap.

Yoda is shown in the prequels to be an excellent teacher of younglings and clearly has great respect for children.  “Truly wonderful, the mind of a child is,” he says when one young student provides an answer that the adults could not see.  So is it really any surprise to see him try to figure something out from the perspective of a child?

And you know he totally had fun doing it, too.

If you want to watch the antics of Toddler Yoda set to a catchy tune, please enjoy the Bad Lip Reading video “Seagulls!” which I wrote about previously here.

I distinctly remember my first two experiences with Star Wars.

The first occurred when I was very little, and it’s so fuzzy I’m not even sure if it’s a real memory or not.  I couldn’t sleep late one night and went out to my mother who was watching TV in the living room; it was only later that I realized I think it must have been the beginning of Return of the Jedi that she was watching.

My real entrance to Star Wars fandom came one summer when I was 8 or so.  My older sister and I had a babysitter that we shared with another family of kids about our age.  Her name was Jessica (I think we called her Jessi), and she tried to make us speak Spanish and gave us all mixtapes of her favorite Queen songs.  Basically she was the coolest.

She wanted to show us one of her favorite movies and popped in a VHS tape of The Empire Strikes Back.  (Jessi had a thing for Harrison Ford.)  We didn’t really know what was going on in the movie.  A guy was in a cave on a snowy planet.  We started asking her questions.

And the guy stretched out his hand, hanging upside down, and pulled his…”lightsaber,” she said it was called, out of the snow using his mind.

I had no idea what the Force was, but I sure wanted to.

We watched the Original Trilogy so many times that summer.  It was True Love.  ROTJ was my favorite (then and now).  When they were re-released as the Special Editions a few years later, my sister and I saw them in theaters.  I then discovered the EU books in middle school.

Basically, Star Wars has become a life-long passion for me, and I’m so excited that the Sequel Trilogy will get to inspire a whole new generation.

Very often in YA trilogies, I am sucked in by the first book only to feel slightly let down by the subsequent books as the quality of the story trails off.  The Girl of Fire and Thorns trilogy (we need a shorter name for this) by Rae Carson was a surprise to me in that it actually did the opposite. *spoilers ahead*

The Girl of Fire and Thorns kicked off the trilogy in a promising vein.  The setting and the writing were both excellent.  Elisa is perhaps not my favorite protagonist, but I liked that she was more scholar than fighter, and I felt I could relate to her weaknesses.  Although Carson puts Elisa in a quasi-love triangle, she refreshingly breaks convention and resolves it by killing off both men, which helps the story neatly move on while raising the stakes.  I wrote a brief review of GoF&T in this post.

The Crown of Embers was one of those rare sequels that I liked better than the original.  In fact, I didn’t just like it, I

loved it.  I read it once almost straight through, and then I immediately started reading it again.  I liked that we got to see more of the capital city of Brisadulce and then also embark on a questing adventure.  The character development was actually more satisfying: it was easy for Elisa to act like a leader in a strange rebel camp, so far removed from her real life, but here we see her start to mature into her real-life role as queen.  And most of all, the slow-burning love story was exciting–I was totally on Team Hector already from the first book!

The cliffhanger-type ending didn’t bother me at all; it’s pretty standard for a second act.  In fact, it is almost exactly the same as the ending of Empire Strikes Back, which leads so well into Return of the Jedi.

The third book, The Bitter Kingdom, carried the story to an interesting conclusion that was almost bittersweet.  Side characters like Storm and Mara continued to develop, and Hector’s new POV chapters, with a clear, distinct voice, were a welcome addition to the story, unlike in some other YA trilogies that have added viewpoints late in the series.

In the 2nd and 3rd books, the first-person present-tense POV really grew on me.  Never before have I felt that this tense added something to the story instead of being needlessly confusing.  But by the time I was done with the series, it seemed so natural that I started writing some of the scenes from one of my novels that way in my head.  So, now I am rethinking the narration in that novel.  I honestly never thought I would even consider using first person present tense.

I mentioned before my love for the setting.  I pronounced all the character and place names the Spanish way in my head, for example Joya = Hoya.  It was fun to get little insights into the world from the Spanish-derived words, like Joya d’Arena meaning Jewel of the Sand.  I was glad to finally see a map in The Bitter Kingdom, because in my head I apparently had the geography of the world flipped exactly upside down and backwards.

I very much liked the way religion was portrayed in the series; it fit well into the story (even its fantasy aspects) without overbearing real-world parallels.  The church (which has strong Catholic influences, fitting the Hispanic setting) is shown as well-meaning but flawed.  Elisa has a real, personal faith, but not all the characters do, and she doesn’t push her beliefs on them.  And after she loses her Godstone, she must start to navigate her way without any response to her prayers, which is how all of us in the real world must practice our faith.

Elisa and Hector are both pretty young, but I appreciated that their relationship ends up being stable and mature.  Through the books they struggle to mesh their professional and personal relationships.  Hector fills a role as Elisa’s protector, which is a common dynamic in fictional romantic relationships, but can sometimes come off as unbalanced, with the protector being too controlling (not a healthy trait to extol).  Elisa, however, has no problem telling Hector to back off when she feels smothered; she knows that as queen, the balance of power is actually on her side of the relationship.  And in fact, part of her growth as queen is learning to let Hector do his job as her Guard, because she really does respect his opinions and knows he is good at what he does.  I like that they do find a balance in their relationship, based on their mutual respect.

After I finished the trilogy, I still wanted more, so I was thrilled to discover that Carson has also written 3 short

stories in this universe.  The were originally published as e-novellas (which is how I read them), but they’ll be out in a paperback collection later this year:

Tl;dr 5/5 stars– I loved this trilogy, and if you like YA fantasy, you will, too.  The 2nd book is the high point.

“I knew it was cold outside, but it seems the Empire has mistaken this for Hoth…”

My husband sent me this email while I was at Christmas Eve Mass, along with this picture of our visitor under the tree.

You may remember that last year he wrapped my presents as R2-D2.  This year he chose to make an AT-AT walker, as featured in The Empire Strikes Back during the attack on the Rebels’ Hoth base.

The legs are made from pocky and other candies, the body had other presents in a box (including a beautiful Molskine notebook…must do more writing this year), and the head is just empty cardboard.  He didn’t want to put anything in the head, since he left a hole for the “cockpit” viewscreen that would allow me to peek inside, and that’s CHEATING.

Here’s the destruction of the AT-AT walker (aka unwrapping it).  I was always really, really horrible at this level in the N64 Rogue Squadron and Shadows of the Empire games.  The tow cable thing is hard, man.  Major props to Wedge and Janson. 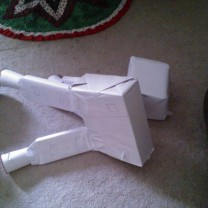 Jolee Bindo uses the Force to defend the Rebels

And here’s a montage of the steps of creating the AT-AT walker (he showed me these pictures after I unwrapped it): 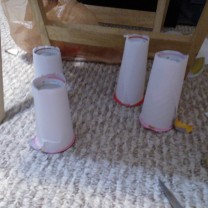 The feet are made from upside-down Yan Yan

The legs are made from pocky, Sweetarts, and my favorite Gobstoppers

The body is ready

The head before wrapping 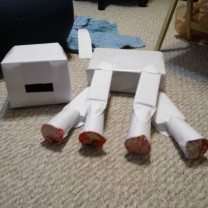 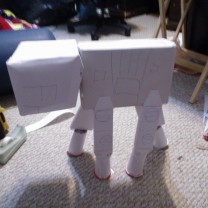 The finished product, with details drawn on. It even stands up on its own!