Honestly, I’m not sure I ever thought I would be at the level of geek where I sewed a bag to hold dice for a role-playing game.  But here we are.

My husband B has played Dungeons & Dragons since before I met him in middle school.  He recently started a game of Exalted, another table-top RPG, with some friends; this game requires, like, three sets of d10 dice or something ridiculous.  He wanted a separate bag for these dice, and drew up a picture of what he wanted.

It looked pretty simple, so I told him we could make it.  We bought some fabric but then never got around to doing anything with it.

Just before last Christmas, B was gone for business for about a week, and I saw an opportunity.  I have a terrible time surprising him with anything, because he notices the tiniest details and changes, but he is excellent at surprises for me.  I figured I could make a dice bag in a couple of days (I also enlisted my mom’s help in planning).

We made a quick pattern out of newspaper, basing the size of the bag off another dice bag B uses (that one is made of chain mail…).  I cut out the colored triangles and sewed them together as shown in his design.  Then I cut a black lining approximately the same size, sewed the two “inside” faces together.  I added an extra seam at the top and threaded some black string though.

I did this bag quickly, so it’s not perfect.  My grandmother is turning over in her grave because my seams didn’t match up in some places. 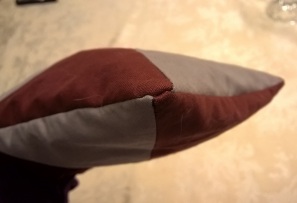 Some quality sewing right there.

But I did finish it in time, and B was definitely surprised.  He’s been using it for his Exalted dice ever since.  I didn’t add any decal to the front yet, but he’s said that instead of the dice in his sketch, he wants a yellow circle like a sun, which is the symbol of his Exalted character’s caste, Zenith.

That’s the chain mail dice bag in the background. 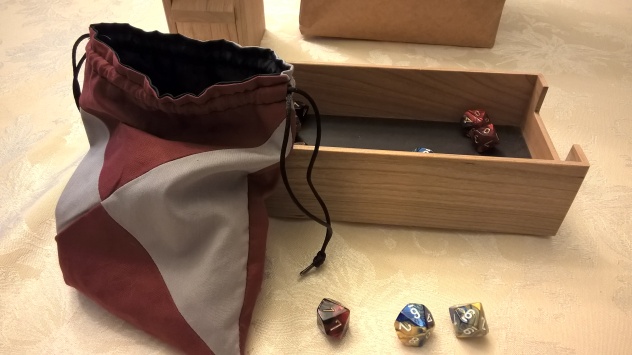