This is a picture you have to look closely at.  It is the only photo I got with this famous Galápagos trifecta: blue-footed boobies, marine iguanas, and a Galápagos penguin all in the same shot.  Our guides were very excited to point this out to us; it’s definitely a win for a phototourist in the Galápagos.

The booby is in the top center, iguanas in the mid center, and penguin in the bottom right.

This blue-footed booby parent is taking very careful care of its eggs.  They will be incubated for around 41-45 days before hatching.  Both parents take turns incubating, and I can’t tell whether this is mom or dad because I can’t see the eye pupils well enough (pupil size is the best visual indicator of booby sex).

This bird species almost always lays two eggs.  If conditions are good, both will grow up well.  But if resources are scarce, the older chick may harass or even kill the younger one to get rid of the competition.

A day on Española

Every day was a great day on our tour of the Galápagos!  Española was one of the last islands we visited and there was so much to see.  Lots of interesting bird species, beautiful scenery, and some time on the beach. 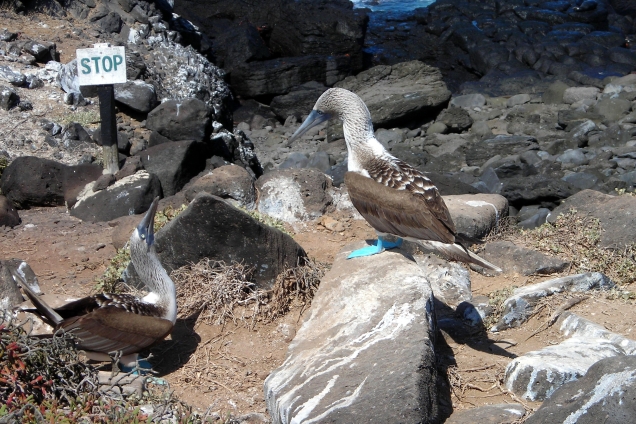 This blue-footed booby male (left) is about to express his interest in this female through a cool courtship ritual known as “sky pointing.”  The males have slightly smaller pupils and slightly larger feet.

Here’s a video I took of the courtship dance; although the quality is terrible, you can see the sky pointing and display of feet and hear the distinctive whistling noise. (Our park guide is speaking at the beginning.)

Blue-footed boobies lay typically lay two eggs, a few days apart.  You can see the chick on the right (born first) is larger than the one on the left.  The second egg is an “extra,” sort of an insurance policy in case the first chick doesn’t make it.

If food is plentiful, both chicks will grow and eventually become independent.  If resources are scarce, the older chick will use its size advantage to monopolize the food, and may eventually resort to pecking or killing the younger chick.  This is called facultative siblicide.

Another species of Galápagos booby, the Nazca booby, practices obligate siblicide, meaning that the older chick always kills the younger, and usually within days of its hatching.