This month marks 20 years since the release of Star Wars: Episode I – The Phantom Menace.  We’ve had ample time to analyze its flaws and weaknesses (which are many), but most fans can still appreciate it for bringing Star Wars movies back to the big screen and introducing the series to a whole new generation.

Even aside from its great technical achievements, the movie does have bright spots, which Germain Lussier tallied in an article for io9.  I think it’s a great list, and I want to expand on a few of my personal favorites from it.  (The images below–screenshots of TPM–were taken from the io9 article.)

How to top Leia’s space buns in terms of fashion?  Her mom Padmé Amidala managed to do it in TPM with a whole wardrobe of amazing dresses and fabulous hairpieces that indicated ceremony and tradition while still looking forward–a wonderful way to represent her role as queen of Naboo. Her clothing has been an inspiration to a generation of cosplayers, as well as to me, a budding fan artist at the time.  I had so much fun designing and drawing new outfits for her; you can see one here that was a bit inspired by the image above.

I still remember the excitement of seeing Darth Maul extend the second blade on his lightsaber in TPM’s trailer.  It is rather impractical as a weapon, but wow, does it look cool.  It certainly allowed for some amazing choreography in the climactic fight scene with the Jedi.  I often give my video game characters double-bladed lightsabers, even though it is usually not as good as dual-wielding two separate sabers.

Bringing the EU into canon with Coruscant

Coruscant, the city planet and Republic/Imperial capital, was first named by Timothy Zahn in his Thrawn trilogy, though Lucas had developed the concept from the time of the OT.  It was shown briefly in the special edition of Return of the Jedi, but appeared properly for the first time in TPM.  The pronunciation was also cemented, with the “c” being silent.  It is just an interesting note in the world building of the SW universe, as well as gratifying for us EU fans.  There are a few other instances of this happening, but not really any as significant.

“Duel of the Fates”

John Williams’ music is essential to Star Wars, and he really brought his A-game to the prequels.  TPM has a nice soundtrack that is anchored by one of the most iconic pieces of Star Wars music ever: “Duel of the Fates” from the climatic battle scene.  It brings such energy while giving a sense of “other”ness with the chanting in Sanskrit, perfect for a fight between disciples of two sci-fi religions, like a ritual combat.  It was the first full choral piece in Star Wars, which was a great choice for impact.  And it fit so well with the on-screen action.

I’ve played a version of this piece before and boy, does that ostinato make you tired!

Ewan McGregor had a tough job, playing the younger version of a character already established in the OT by esteemed thespian Alec Guinness.  But he really stepped up with one of the best performances of the prequel trilogy.  Obi-Wan seems like the same character, down to the accent and mannerisms.  He brings a great dry humor to the role as well, much needed in a trilogy that could be overblown at times.  Plus, this role made him my first celebrity crush!  I really used to have a life-size cardboard cutout of TPM Obi-Wan in my room (a birthday gift from my fellow Star Wars-fan friends in high school).

Obi-Wan’s emotional journey during final lightsaber battle is really excellent.  His anguish as he watches helplessly as his mentor is killed in front of him; his struggle to control his emotions instead of letting them control him; his quick thinking and fortitude that eventually help him to overcome a superior foe: it’s all there on his face and in his actions.  There’s nothing better than a fight scene that provides character development.

Do you agree with the list?  What do you think has held up from TPM?

Welcome back to our Star Wars coloring book club, where Kiri at Star Wars Anonymous and I color the same image every month to compare and contrast. 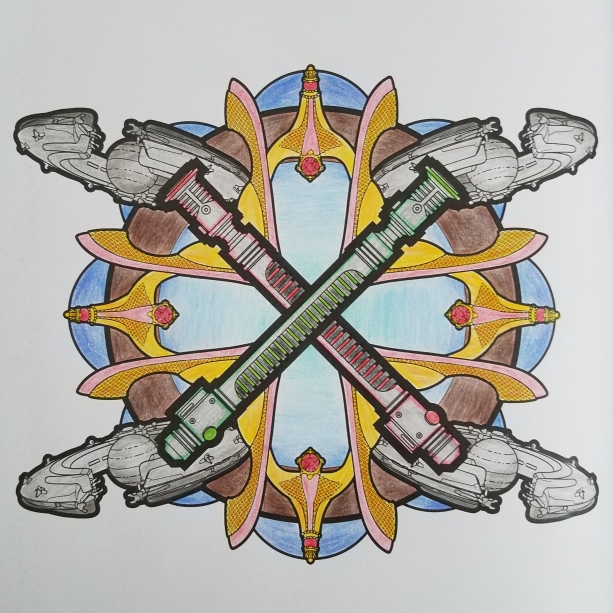 I kind of enjoyed this one, mostly because I was able to do it almost entirely while my kid was napping.

This mandala has The Phantom Menace written all over it.  Amidala’s headdress, the Trade Federation’s droid control ship, and the dueling lightsabers all reminded me of the first prequel movie.  Although the lightsabers are generic, because it reminded me of Duel of the Fates, I colored one green for Qui-Gon and one red for Darth Maul.

Check out Kiri’s version with some lovely colors (and Qui-Gon and Obi-Wan’s lightsabers) here.

Next month we’ll do the slightly obscure Ephant Mon (near the back of the book).

Kiri and I are postponing our coloring book pictures this month, so I’m bringing you an original drawing.  Just as with Cardcaptor Sakura, I enjoyed drawing Queen Amidala because I could invent elaborate outfits for her.  This one seems a bit medieval-inspired.  The writing says “Queen Amidala” in Japanese katakana, though I made a small mistake in “queen.”  The date is 2006, when I was at university.  I was beginning to study Japanese and probably practicing the characters I was learning.

Welcome back to our Star Wars coloring book club, where Kiri at Star Wars Anonymous and I color the same image every month to compare and contrast.

We meet Amidala as Queen of Naboo in Episode I, and I have always loved her dresses and makeup. So I always enjoy coloring Amidala. I wanted to use the core colors of red, gold, and black from her outfit, which fit the poppies perfectly.

But I also wanted to incorporate other colors. I hit upon using royal blue, mixing blue and purple. Purple has been associated with royalty since Roman times, so I thought it was fitting thematically.

The monarch of Naboo is the head of state for the planet (the governor of Naboo being the head of goverment). It is actually an elected position, and I always thought it was strange that the people of Naboo seemed to frequently elect teenage girls to the position. Amidala was elected at the age of fourteen. In my experience, teenage girls are not always a font of calm and logic, but the queens seem to be the exception to that rule.

Check out Kiri’s version here (and read her thoughts on Amidala’s stoic facade).

What better way to continue celebrating the new year than with a Star Wars coloring book page?  This month, we are showing the prequels some love, having colored Queen Amidala of Naboo from Episode I.

As usual, I started with Amidala, then filled in the rest in the background.  I had to sharpen my red pencil in the middle of this haha.  Amidala’s outfits are one of the highlights of the prequels for me, and this one is so iconic.

I had a lot of fun combining colors to make different shades.  For example, I added some orange to dark yellow to make the gold on Amidala’s outfit and the borders.  I added dark brown to mahogany for the pillar scrollwork. 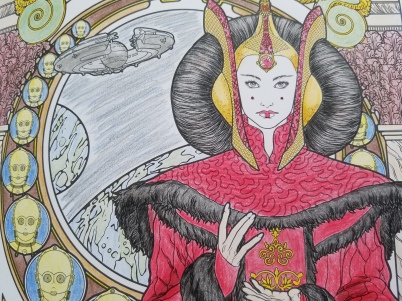 I discovered while coloring this that Naboo actually has three moons; I think the one pictured is Rori, which looks visually similar to Naboo.

The gold decorations down her front took the longest, but were strangely fun to do.  Here it is in progress (before I layered the orange on the swirly parts):

At first I was going to color the whole Theed palace all in green, but I just couldn’t bring myself to do it because it wasn’t accurate.  So I did a cool gradient thing with the rocks instead.  It’s probably my favorite part of the picture, but I still feel like the picture as a whole would be better if I’d gone with my original plan (stronger contrasts).

Kiri was too busy to join in this month, but hopefully we’ll see her version over at Star Wars Anonymous soon.   We’ll be back with another picture next month!