As an elementary school student, I read a wonderful book called A Proud Taste for Scarlet and Miniver and promptly fell in love with Eleanor of Aquitaine, the Middle Ages, and Abbot Suger’s idea that beautiful things could give glory to God.  In his case, “beautiful things” included the first church in the Gothic style at St. Denis in France in the 1140s.

I did not get to see Gothic cathedrals myself until many years later, when I first visited Europe as a university student.  I am still mad about them.  I have seen many Gothic churches in several countries (though my favorites are in Spain).

From my Spanish art history course, I learned about the architectural transitions from Romanesque to Gothic, then to Plateresque in the late Gothic period and on to the Renaissance.

So it’s no surprise that I would love a novel about the building of a Gothic cathedral. But The Pillars of the Earth by Ken Follett is more than that. This behemoth has hidden depths, and it made its way onto the top 100 list for the Great American Read for a reason. 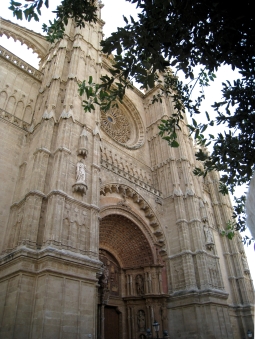 The novel works on several levels.  At its most basic, it is a family drama, chronicling the struggles and joys of life over several generations.  Tom the builder, his stepson Jack, the earl’s daughter Aliena, and the new earl William all deal with matters of life, love, and death, all watched over by Prior Philip, the leader of the Kingsbridge monks. 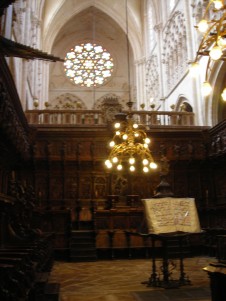 The setting of a village in England in the 1100s adds another layer of historical fiction, with such details as how cloth was felted, what people ate and how they celebrated holidays, and the hierarchy in religious institutions like a priory. 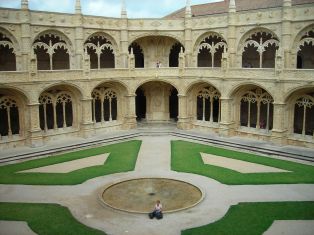 Lastly, it fits neatly into the epic narrative of English history, weaving in connections to events of the civil war between Empress Matilda (Maud) and her cousin Stephen, the ascension of Henry II, and the murder of Thomas Beckett.

The cathedral itself is particularly interesting.  Each architectural element of the Gothic style is developed and explained organically as the story progresses: the pointed arches, ribbed vaults, flying buttresses, and stained glass windows. 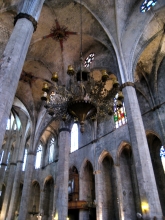 Pillars is inspiring not just because it shows a beautiful creation dedicated to God, but because it also shows that here on Earth, justice is possible and worth fighting for, whether it is the result of a curse by a “witch,” meted out by bishop or king, or at the hands of the mob/public opinion.  Though the Catholic Church obviously features prominently, it is not an overly religious book.  Also, the supernatural and the divine are presented as two sides of the same coin, which feels natural to the time period.

Follett’s prose is not the best I’ve read, but the twists of the story held my attention and kept me on my toes.  I was surprised how invested I got in the details of the story and how all the events stayed with me. I’m sure somebody is going to have problems with the two main female characters, but I liked them both.  I’m looking forward to reading the sequels which take place in the same area, jumping ahead several generations.

After all the hours I put into reading this book (for perspective, the audiobook version is about 40 hours long), I can say it was time well spent.  I can easily see why many people name the informative but engaging Pillars of the Earth as one of their favorite novels.  It has certainly stuck with me, and I look forward to continuing with Follett’s Kingsbridge series.

11 thoughts on “Review: The Pillars of the Earth”