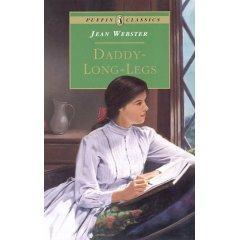 This review is my contribution for National Book Review Month (NaRMo).

Daddy-Long-Legs by Jean Webster is a charming short little novel, more of a novella, that I stumbled upon recently.  Published in 1912, it has a classic feel that has been popular with readers over the years, though I am surprised that it is not better known now.

Jerusha Abbott has lived her whole life in an orphanage, with the monotony of her studies and duties with the younger children broken up only by ice cream on Sundays.  When an anonymous benefactor offers to send her to college, she reinvents herself as Judy, a vivacious coed studying to be a writer. Her benefactor’s only requirement is that she write him letters to keep him updated on her college career, which she addresses to “Daddy-Long-Legs,” because all she knows about him is that he is tall.

Except for short introduction, the book is entirely epistolary in format, consisting of Judy’s letters to Daddy (or other epithets like “Mr. Rich Man” when she’s piqued).  Judy knows that she will receive no reply to her letters, except perhaps curt instructions from Daddy’s secretary, so the story is wonderfully one-sided yet still manages to give an impression of what her benefactor’s actions, thoughts, feelings are.

Most of the letters are amusing and often flippant, but her determination and struggles occasionally break through.  She is both full of goals and dreams for her future and at the same time determined to live life to the fullest here and now.  There are charming details of life at a women’s college mixed with her cheeky passages determining what kind of socialist she is.

The twist to the story was of course obvious to me immediately, but the dramatic irony was really enjoyable as I read between the lines of Judy’s letters to see the relationship taking shape. The ending is a bit abrupt but satisfying.

Webster also wrote a sequel called Dear Enemy, which consists of letters written by Judy’s college roommate Sallie McBride, whom Judy talks into taking over running the orphanage. While equally entertaining as the original, this novel has a few quaint thoughts (some bordering on harmful) regarding “Negroes,” “Indians,” and the “feeble-minded,” which will require some critical thinking for modern readers.  The two books together have some shadows of Jane Eyre, and I can see them being very popular with young women in particular.