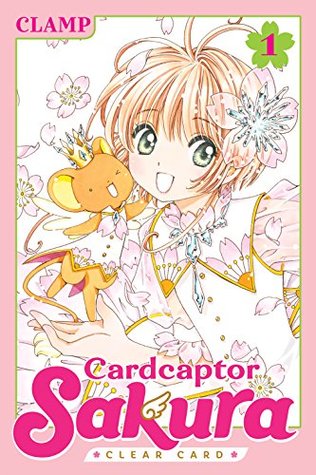 Most fans of anime will tell you that there was a “gateway drug,” so to speak: one show that hooked them and got them into the medium of anime in general.  Ask people of my generation, and they will name shows like Dragonball Z and Sailor Moon as shows still hold a special place in their hearts.

For me, it was Cardcaptor Sakura by CLAMP.

From my first viewing of the terrible English dub Cardcaptors, I was hooked.  The manga, with two story arcs of six volumes each, was even better, and remains to this day my favorite manga.  I own two versions of it, a boxed set of the volumes and an omnibus edition.  If you like magical girl anime, it doesn’t get any better than CCS.

When I heard a few months ago that CLAMP was putting out new volumes of Cardcaptor Sakura, I screamed so loud my husband came to ask me what was wrong.  Wrong?  Nothing’s wrong!  This is only the best day of my life!

The first volume of Cardcaptor Sakura: Clear Card is now available in English, with more to follow in the next months, and the anime is currently running in simulcast on Crunchyroll and in “simuldub” on Funimation.  I have not seen the anime yet, but I devoured the first manga volume when I got it for my birthday recently.

The Clear Card story arc picks up exactly where the Sakura Card story arc left off.  The first chapter expands on the last scene of the last manga, where Syaoran surprises Sakura on her way to middle school, saying he’s returned to Tomoeda to stay for good.

The story continues in a very familiar fashion, hiting all the typical Cardcaptor Sakura beats: a mysterious figure appearing in Sakura’s dreams, strange forces working in Tomoeda, new cards (this time they are transparent), a new, upgraded staff, and of course new costumes made by Tomoyo-chan!  All of Sakura’s friends and family are back as well.  I like that it has such a familiar feel, and I can’ wait to see what twists and turns are coming as the story develops more.  What secrets are Syaoran and Eriol keeping?

The artwork remains absolutely gorgeous.  There are so many beautiful large panels and two page spreads that really let you appreciate the art.

I really enjoyed the experience of reading this volume, because for me it was the first time reading a CCS manga without having seen the anime first.  I’m sure I will watch the anime soon, maybe even before reading more volumes, but it was kinda fun to have an “all new” manga to read.

The only thing I found slightly jarring was the incorporation of modern technology in the story, like smart phones, email, and texting.  While it was worked seamlessly into the story, it was just surprising to me because the story takes place immediately after the original volumes which were produced in the 90s and therefore barely had the concept of primitive mobile phones. So it was a big jump forward in technology with no jump forward in time.  However, I don’t think they could have handled it any better and it didn’t affect my enjoyment of the story.

Basically, it’s just wonderful to be back in the CCS world after fifteen years away.  And this volume has only just whet my appetite for more.  This is just the beginning!