I had so much fun looking at my favorite versions of Beauty and the Beast a few months ago, I thought I would do the same with another favorite fairy tale, Cinderella.  This one was way harder, because I have read and seen so many more versions of this tale, and some of them rank among my favorite fairy tale retellings of all time.  I managed to narrow it down to five…plus a few honorable mentions.

This Disney live-action version by Kenneth Branagh, building off the classic animated version, was a pleasant surprise for me when I saw it at the drive-in theater.  First of all, it is visually gorgeous in its costumes, sets, and cinematography.  The actors are uniformly engaging; Cate Blanchett in particular is a treat as the Evil Stepmother.

It also has the most wonderful soundtrack, centered around a charming version of the folk song “Lavender’s Blue.”  I even used the soundtrack as writing music during NaNoWriMo.

But the best thing about it is the way it improves on the original Disney movie.  The original Cinderella is one of those pretty princesses without much agency, and the plot relies heavily on insta-love.  This version condenses the themes of Cinderella stories nicely with its mantra of “Have courage and be kind.”  It’s the kind of moral I would be happy to see a daughter of mine glean from a fairy tale.  We also see a much more developed relationship between Cinderella and the Prince.

I read this story for the first time about a year ago and fell in love with the creativity of this retelling.  First, it’s a sci-fi take on the story (Cinder is a cyborg), and it actually has some pretty cool biological concepts in it.  It also has a lot in common with Sailor Moon.

The romance is slow and sweet; how can you not love Prince Kai?  I also liked that there is not really one specific Fairy Godmother in this story; Cinder makes it to the ball with her own willpower (and a little help from darling Iko the android).

Cinder is only the first book in the Lunar Chronicles series, and as such it does not have a happy ending.  Instead, it spins nicely into the other stories without being saccharine.  I also really liked how the series goes on to feature other great female characters from fairy tales, ending in an awesome team-up. 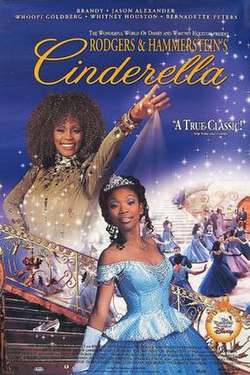 My family had recorded this on VHS when it was on TV in 1997, and I can’t remember how many times we watched it as kids.  Brandy plus Whitney Houston is just a magical 90s combination.

This version, like the previous two mentioned above, also uses the idea of the Prince and Cinderella meeting once prior to the ball, which I always thought made more sense.

The songs may not be on par with Rodgers and Hammerstein’s best, but they do the job, and the cast really breathes life into them.  My personal favorite is “Ten Minutes Ago,” sung by Cinderella and the Prince at the ball.  The dancing scenes are also fun, and the actors play up the comedy throughout nicely.

Speaking of the cast, I love the racial diversity here.  We have black, white, and Asian characters, sometimes all in the same family.  Of course, the story does not address this fact in any way, but visually it’s nice to see that representation. 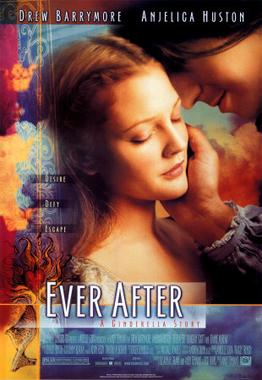 Before Disney’s big screen, live action version a few years ago, the Cinderella movie crown was unquestionably held by Ever After, which is apparently appropriately subtitled “A Cinderella Story.”  This version grounds itself in real life by taking place in Renaissance France, with a framing story about the Grimm Brothers collecting European fairy tales.

Our main character Danielle has dreams, but she also has nerve and ambition.  She is one of the boldest Cinderellas I can think of, pretending to be a courtier as well as standing up to gypsies.  She is also very well-read thanks to her father, being able to quote Utopia.  I think my favorite part of this version is that Leonardo da Vinci serves the role of fairy godmother in helping Danielle get to the ball. 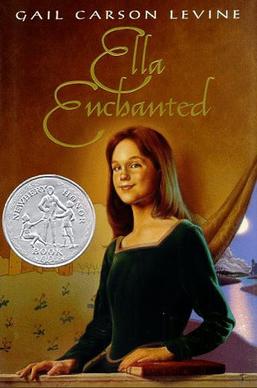 For me, this is the book that started my entire love of fairy tale retellings.  I still re-read it, even now, most often going back to my favorite part: the letters that Char and Ella write to each other while he is away in Ayortha.

In this version, Ella is not obedient of her own accord; no, she has been cursed to be obedient (the fairy who bestowed this trait called it a gift!).  Ella must do anything that anyone commands her to do.  This, of course, nearly ruins her life, and the lives of her friends, so she sets out to break her curse and is able to overcome it in the end.  The story actually has a lot to say about autonomy and free will, which is pretty deep stuff for a children’s book; I think that’s one of the reasons it’s so beloved.

Even as it adds to the original tale, it stays close to its origins, using devices like Ella’s fairy godmother, the glass slippers, pumpkin carriage, and three nights of balls.  Plus, this book has everything you could want from a children’s fairy tale: magic curses, fantasy creatures like fairies, elves, ogres, and centaurs, made-up languages, and an adorable main couple.

There is also a movie version of Ella Enchanted, starring Anne Hathaway, that is delightful, but aside from the basic premise does not have that much in common with the novel.

I couldn’t let it go with just five this time, so here are some Honorable Mentions:

This story is the sequel to Princess of the Midnight Ball, itself a retelling of “The Twelve Dancing Princesses.”  The main character is Princess Poppy of Westfalin, who is just awesome, with so much humor and spunk.  But she is not really the Cinderella character; though Poppy does stand in for her once, the real Cinderella, Eleanora, is a side character and the Cinderella story is really more of a side plot.  I liked that it is a bit darker; for example, the fairy godmother is not good, and the molten glass is poured on the girls’ feet to make the slippers.

I will be honest: this is objectively not a great movie.  But I just love it anyways!  I guess I am just a sucker for dance movies.  Selena Gomez stars as an aspiring dancer who falls for a famous teen pop star after they dance together incognito.  The dance numbers are awesome, and the songs are stupidly catchy.  And how can you not love Jane Lynch?  She is hilarious as a has-been pop star in the evil stepmother role.  I like it way better than the first movie in the series with Hilary Duff, and the two movies after it get progressively worse.

Did you know there is a ballet version of Cinderella?  I danced in it when I was younger, as a “court lady,” aka part of the corps de ballet.  (My costume was a long maroon dress…maroon is a terrible color for redheads.)  The score by Prokofiev is very nice, though not as memorable as, say, Tchaikovsky’s The Nutcracker.  There are several versions of choreography (I don’t know which my company did), but the story is very classic.

What is your favorite version of Cinderella?  One of these, or a similar story from another culture?

21 thoughts on “My Top 5 Versions of Cinderella”