Ohio has several good yearly conventions, and the one for gamers is Origins Game Fair every summer in Columbus.  My husband B headed down for four days to meet some friends and play some games.  While he was there, I discovered that two of my favorite Star Wars authors were also in attendance!  So I gnashed my teeth that I had stayed home and sent B to go meet them. 🙂 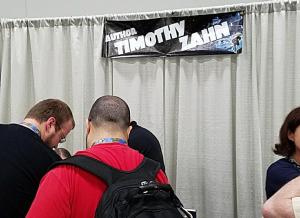 He went first to Timothy Zahn’s booth.  Zahn is best known for kicking off the old Star Wars Expanded Universe books with the Heir to the Empire trilogy, and he recently brought one of his best-loved characters back into SW canon with Thrawn (which is on my to-read list).

B got to chat with Zahn for a little bit, and with a promise of my undying love in return, he procured me a signed copy of one of his books.  Scoundrels is a fun little heist story featuring Han Solo and Lando; I reviewed it here a few years back.  B knew I already own the Heir to the Empire trilogy, and Zahn was kind enough to suggest that he sign bookplates for my copies of those novels as well.  There was a lot of squeeing when B got home with this surprise. 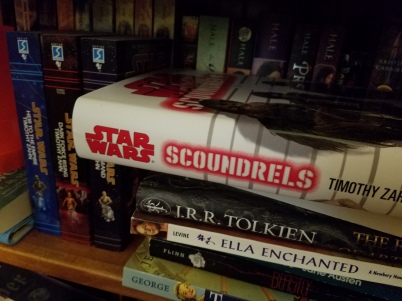 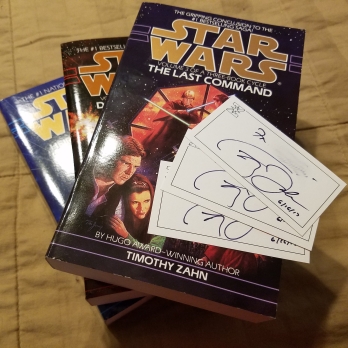 I asked B if he told Zahn that Mara Jade is my favorite EU character, but sadly he had not.

Next, he found Michael Stackpole’s booth.  Stackpole is known for his excellent Star Wars X-wing series, and I have read a few of his fantasy novels as well (check out reviews here and here.)  Sadly, Stackpole had already sold out of books, but B got to chat with him for a bit as well.  He was able to inform him that I named my laptop after his X-wing pilot character Corran Horn (it’s silver, like his lightsaber).

In retrospect, I’m not at all surprised that these two authors should be at Origins, because they are both known to fans as big gaming nerds and frequently attend cons.  They’ve both written in game universes like WOW and Starcraft; Stackpole just finished a novel set in the Pathfinder universe, a tabletop RPG setting similar to D&D.  Stackpole has also been a game designer his entire career and is a board member of GAMA, who runs Origins.

So, who knows?  Maybe next year I’ll make it down to Origins to meet them both in person. 🙂