I know haven’t been nearly so overwhelmingly enthusiastic this December about the upcoming Star Wars movie as I was last December.  But that’s not to say I’m not excited.  I’ve had my tickets for Rogue One: A Star Wars Story for a couple weeks now–I’ll be seeing it at 9pm on Thursday Dec 15 at my hometown theater.

Last week at Target I picked up a T-shirt to wear to the opening.  They have a whole collection there as part of the Force for Change initiative: for every shirt, Target donates $5 to UNICEF, up to $1 million total. 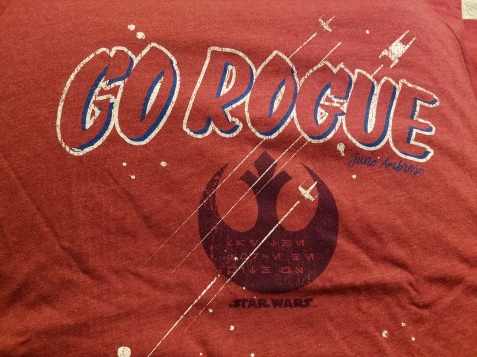 I picked this one because it was a nice color and had the best slogan: Go Rogue!  It reminds me of Rogue Squadron, and there’s even tiny X-wing fighters in the background.  It also has the Rebel crest; the letters on the crest are Aurebesh, which is the written form of Galactic Basic.  It says “May the Force be with us.”

The early reviews I’ve seen of Rogue One have been overall positive!  Here are a few things I’m looking forward to.

8 thoughts on “Ready for Rogue One”