Being such a huge fan of fairy tale re-tellings, how could I have waited so long to read Cinder, Scarlet, Cress, and Winter?  I really don’t know!  The only advantage is that now I got to read them all straight through!  Rating: 5/5 stars

Cinder is a very strong start to the series.  I knew Cinder was a sci-fi take on Cinderella, even a little future-tech with cyborgs, etc.  But I didn’t know that it also draws heavily from Sailor Moon!

More on the Sailor Moon aspects in a later post, but let’s just say I was excited like Usagi here when I noticed the connection.

Cinder hit a lot of the same beats as my WIP Ash and Team, which is also a Cinderella-type story, but I wasn’t disheartened by that fact.  I was completely inspired, my mind opened to what my story could be.  I actually dreamed up a new scene for my story the day after reading Cinder.  (Even more inspiring: Cinder, Scarlet and Cress all began their lives as NaNoWriMo projects!  I’ll try to keep that in mind as I’m writing this month.)

I really liked that the ending of Cinder wasn’t saccharine; it actually ends on kind of a down note as it leads into the rest of the series.  Scarlet picks up right where Cinder leaves off; it can be tricky to switch to new main characters in the middle of a series, but each successive book does a great job splitting the focus between new and old characters (although Winter in particular gets a little bloated as a result).  And being a redhead myself, I was glad to see Scarlet as such a great embodiment of the “fiery redhead” trope (even though I am nothing like this!).

This wouldn’t be a true Jedi by Knight review unless I critique the biological concepts in these books–but don’t worry, these get pretty good marks for YA sci-fi.  For some reason, plagues are all the rage in YA dystopias right now (Matched, Maze Runner, Legend, etc.), and the Lunar Chronicles follows suit with the virulent disease letumosis (and a lot of unethical scientists to boot).  This plague has some interesting symptoms (rashes, blue fingertips) and does mutate over the course of the books.

Overall I didn’t have much issue with the biology except for a bit of confusion in Winter on the difference between vaccines (a preventative measure, typically for viruses) and antidotes (a cure for either symptoms or the underlying pathogen of a disease).  The vials of antidote that Cinder finds are incorrectly labeled as “vaccines,” and additionally they are stored at room temperature while vaccines are typically refrigerated or frozen.

One particular concept from Cress that I really liked was the isolation of hematopoietic stem cells from bone marrow for use in regenerative therapy.  This is actually something we do regularly in my lab!  (We’re focused on cardiac disease, though.)  Though it might not really be the first choice for treatment in this case, I thought it was a really creative way to make some actual science work with the fairy tale story line.  It’s not every day YA sci-fi correctly drops words like “hematopoietic!”

In short, these books really succeed at all aspects of sci-fi, fairy tales, and light YA romance.  Even the ending was a nice surprise for me because it didn’t quite end like I expected.  I’m currently working through Stars Above, a collection of short stories from this universe, and Fairest, the story of the Evil Queen Levana which is kind of Book 3.5 in the series. 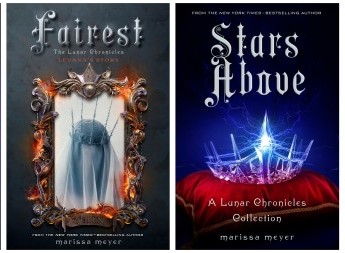 3 thoughts on “Cinder and the Lunar Chronicles (Review)”