Welcome back to GNBC, a bimonthly virtual book club hosted by Geeky Musings from a Nerdy Girl. 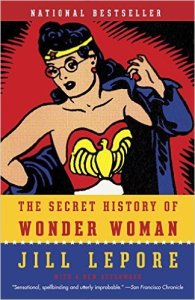 We’re back to nonfiction this month with Jill Lepore’s The Secret History of Wonder Woman.  There is a lot of information in this book, not just about Wonder Woman but also about her creator William Moulton Marston and the women in his life that influenced the superheroine.

I came to this book not knowing a lot about Wonder Woman.  I’ve never read her comics, and I wasn’t alive for the 70s TV show, so my primary experience with her was the DCAU’s Justice League and JLU cartoons.  To me, she’s always been the weak point of DC’s Big Three: too powerful to be interesting, and too…fashion-challenged to represent comic women as a whole.

But with this year being the 75th anniversary of her creation, I was eager to learn more about Wonder Woman, and I’m happy to report that I am now definitely on Team Wondy.

I got off to a bit of a rocky start with this book, because I was turned off by the tone; the author’s intro has things like “Stop the presses. I’ve got the history of Wonder Woman.” that I found hyperbolic, bordering on smug. (For context, those sentences echo lines from a WW comic, but the reference felt more patronizing than something that would come from a fellow geek.)

My irritation continued into the details of Marston’s psychological experiments (which included developing a lie detector test).  This was not the fault of the author, but rather Marston himself, who was apparently a terrible scientist.  His “experiments” often barely warrant the name, with small sample sizes, questionable methodology, and dubious conclusions; yet he was constantly trying to “sell” his science to the media and the public.  Reading these descriptions, it’s hardly surprising that experimental psychology is currently undergoing a reproducibility crisis.

Also irritating is the fact that it was Marston’s name on all these papers, professorships, etc. when his wife Sadie Elizabeth Holloway had nearly identical credentials and worked on many of these projects with him.  For me, she was the most interesting “character” in the story.  My respect for her was cemented by her reaction to Marston’s ultimatum regarding his affair with Olive Byrne; she agreed to let Olive live with them, but Holloway would keep her career and let Olive raise the children.  Also, after Marston’s death she lobbied heavily to take over writing WW, but naturally was denied, which lead to a decline in quality of the comic.

Part way through, the book shifts into the history of early 20th century feminism, which I knew shockingly little about and found fascinating.  This leads up to the introduction of Olive Byrne, who was Margaret Sanger’s niece.  Olive was also very interesting to me, because while she seemed perfectly happy living the kind of “nontraditional” lifestyle that she did, she also lied and lied and lied about it until her death, even to her children regarding who their real father was (Marston).  Her bracelets were the inspiration for Wonder Woman’s.

By the time we got to the actual creation of Wonder Woman I was quite enjoying the book.  I had never even seen a strip from WW’s original run, so I was thrilled that the book makes liberal use of the images from it.  After reading this, I feel like I can really understand and appreciate Marston’s vision for Wonder Woman, who was strong both physically and emotionally and whose ultimate goal was “community.”

This vision has unfortunately been deviated from over the years, resulting in a Woman Woman wields a swords and shield and kills people while spilling out of her bustier.  It will be interesting to see which version we get in her feature film debut next year.

Lastly, for another perspective on this book, I was able to hear the granddaughter of William Moulton Marston and Holloway, Christie Marston, answer some questions at a Wonder Woman symposium last month.  Her opinion of the book was that it was “fiction;” she particularly disagreed with how the Moulton family was portrayed.

Fiction or not, it was a very enlightening and thought-provoking book.  It may be a bit dense in places for casual readers, but I would definitely recommend it to comics fans or feminists.