If you play video games at all, especially RPGs, you’ve probably heard of Final Fantasy VII.  It released in 1997 for the PlayStation and has come to be known as one of the greatest games of all time.

It is certainly one of my husband’s favorite games ever, and he is greatly anticipating the upcoming high-definition remake of the game.  He’s been wanting me to play the game for years; I’ve started it multiple times and never progressed very far (I didn’t even get to the open world map).

So we’re taking a staycation this week and playing FFVII.  Or more accurately, he’s watching me play it (the reverse of what usually happens).

The game follows soldier-turned-rebel Cloud Strife and his party on their quest to save their planet from the evil Shinra corporation and the godlike Sephiroth.  I already know the basic story, and “spoilers” for a 20-year-old game is kind of a silly concept.  I’ve also already seen Advent Children, a movie set after the game.  So I know all the characters, and I know who dies.

My goal for Monday was simply to get farther in the game than I had before (aka, leave the Shinra building), and I was successful!  B gave me a mod that started me with tons of XP and money, so combat is super easy and I don’t have to grind.  This is speeding up the game a lot, and I might actually be able to finish it this week. 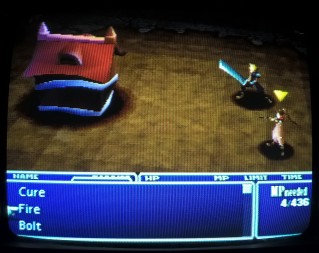 I set this house on fire. Literally. 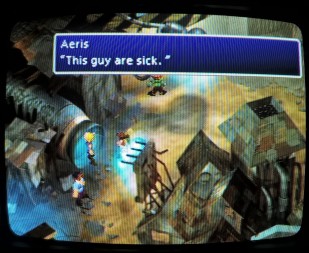 As I said, B is watching me play so he can give me advice and help me when I get stuck.  He knows exactly what to do to get specific outcomes.  This is really helpful, because I’m used to relying on game journals in RPGs to remember what I’m supposed to be doing, but FFVII doesn’t have one, and I’d be wasting so much time just wandering around.

My biggest challenge starting out was figuring out how to walk in a straight line, and where the paths go.  In my defense, the graphics are not what I’m used to haha.  But I’m getting better.

I’m about 14 hours into the game now, and I’ve gotten out to Midgar onto the world map, crossed an ocean, and learned more about Cloud, Barret, and Red XIII’s backstories.  Red XIII in particular is a favorite of mine; I call him “Red Shii” because of this video.

I’m really enjoying way the story is told, with lots of unfolding mystery and flashbacks.  I also already loved the music, which I’ve seen performed live, and I find myself humming along.

My party is generally either Cloud/Tifa/Aeris or Cloud/RedXIII/Aeris.  Basically, a fighter, a thief, and a magic user.  The materia system is also really fun and I’m trying lots of combos with different characters.

I can already see a little why this game had such a big impact on so many young gamers, including my husband, in the 90s.  Maybe I’ll be playing the remake when it comes out, too!