B and I had a great time a few weekends ago at the annual Board Gamers of Greater Akron retreat.  In addition to learning some new games and playing old favorites, I got plenty of downtime for reading, too–crucial for an introvert like me!

Here are some highlights; check these out if you like board games!

I wrote about this fun social deduction game before, describing it as a co-op mix of Clue and Dixit.  I recently played the American version that came out last year; it has really nice pieces and adds some new gameplay elements that make it more of a “game.” 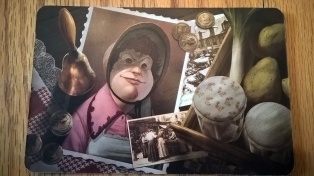 I cannot figure out this woman’s profession. She’s wearing a bonnet, has potatoes, leeks, and a bell, random coins, and a picture of a group of women in Edwardian dress. We were divided between cook and schoolteacher. Any thoughts?

The name and spy theme may remind you of The Resistance, but this large-group team game has more in common with Password or Taboo.  Each team has a spymaster, who gives one-word clues to the other team members to get them to guess certain words on the board.  The result is always hilarity.

Being the spymaster is hard but fun.  I think the key is to not be too pedantic and try to think how your teammates think!

Ticket to Ride is one of my favorite Eurogames, but I’ve only played the USA and Europe maps of this fun train-building game.  So I jumped at the chance to try the Asia map, which has one side for a team version where you share some route goals with a partner.  I loved it!

I asked for this card drafting/set collection game for Christmas before I ever played it, and sure enough it’s awesome.  First, it’s just a pretty game: nice pieces, nice artwork.  It’s also fairly simple and quick, and has great replay value.  Plus I won the first time I played! (To be fair, I think there’s a first player advantage).

I was referring to this as the “camel game” when B informed me that there are, in fact, multiple Eurogames with camel themes.  Who knew?

Anyway, this is a quick, easy, 2-player game with a fun merchant-trader theme.  Did I mention the camels? I love the camels.

5 thoughts on “Now Playing: Board games from the BOGA retreat”