Dantooine is our last planet on our quest, and it’s also where things started to go a little off-track for me.  You may have noticed the time between these KOTOR II posts is getting longer; I blame Dantooine.

I knew that Dantooine was where my character Tyria Drace planned to meet all the Jedi Masters once she located them, so I kind of thought it would be nice to go there last so I could just continue the story after finishing the planet quests.  It turns out that Dantooine is a terrible choice for a last planet.  Not only was it a bit anticlimactic, but a bunch of glitches also popped up here which made me frustrated, and I started to lose interest in the game.

Because of the crystal caves, Dantooine is a great place to get lightsaber crystals…except that I’ve already souped up my lightsaber over the past several planets, so that didn’t help me all that much.  In fact, already having a lightsaber and wearing it openly made the natives kind of hostile to me, which didn’t help either.

On our way to the Jedi Enclave, we ran into a group of Mandalorian mercenaries.  I switched Mandalore into my party to get an interesting scene that actually made me mildly glad I’d visited Onderon and Dxun first.  Mandalore tried to command the Mandalorians to leave Dantooine and join the clan on Dxun, but they were rather unwilling.  So he easily beat up some poor unarmed merc, and then they were rather more willing.

We headed to the Jedi Enclave, which looks quite a bit more dilapidated than it did in the original KOTOR. 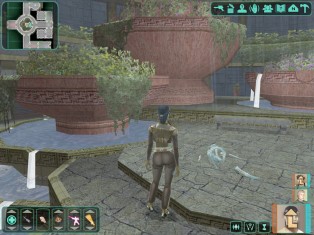 Don’t remember any skeletons before…

Unfortunately, I missed a quest prompt back in the Khoonda city building regarding a thief that hides in the enclave, so I wasn’t able to do that quest at all. Bummer.

I did meet my last companion in the temple, though: Mical, the Disciple, whom I recall being pretty lame.  Even worse, I had Atton with me when I met the Disciple (because I always have Atton in my party), and he was pissed that I let the Disciple join our party.  Ugh, boys.

I still love you more, Atton.

I was already having trouble getting Atton to spill about his mission on Dxun because I was lacking influence, and now I’m even worse off.  I seem to have hit a wall in the conversations with all my companions, and I don’t know what to do to get more influence with them and get more of their backstories.  (Atton is the only one I’ve been able to turn into a Jedi.)  I really wish this was like The Old Republic and I could just toss companion gifts at them to get them to like me.

I did enjoy the “new” scene involving a Padawan hiding in the temple, but the Padawan had no vocal dialogue track so it skipped through her dialogue really quickly and I’m not sure I caught all of it.

Our next stop was the crystal caves, which are crawling with kinrath.  A mercenary there has a device made from a kinrath gland that lets him walk undetected among them, and so I get to say one of my favorite lines:

I had some problems in the cave; at one point my Force points wouldn’t refill and the graphics got messed up.  Also I got killed by the kinrath boss because it didn’t notice it in the mob of other kinrath until it killed my companions and by that point I was screwed.

Heading back to Khoonda city I hit another fun glitch where my character was gliding around instead of running.  And when I went to set up the city’s defenses in preparation for a mercenary attack, the mines I set went invisible.  Hmmmm. 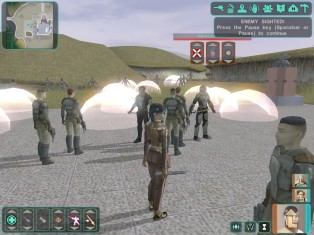 I successfully lead Khoonda’s troops to victory against the attacking mercenaries, in some of the easiest combat in the entire game thus far.  Hopefully now the people of Dantooine won’t hate Jedi so much anymore.

I’ve now met all the Jedi Masters in hiding throughout the galaxy and it’s time to meet them all together in the Jedi Enclave.

I forgot to check the exact time again, but it’s around 39 hrs 30 min  play time.  Next time we’ll be starting end game content, and I think I’ll be less snarky.

Continue on the next part of the series here: Revisiting KOTOR II: (#9) Optimal Accuracy Ratio Achieved

One thought on “Revisiting KOTOR II: (#8) Dantooine…we’re on Dantooine”