Welcome back to my 2nd ever playthrough of KOTOR II, now featuring widescreen!

Today we’re on Korriban, one of two planets in the game that were previously featured in the original KOTOR.  Korriban is the ancient homeworld of the Sith (it’s now called Moraband in SW canon).

Korriban really highlighted difference for me between first and second KOTOR games.  In the first game, you infiltrate the Sith Academy, and then a lot of your time is spent raiding the tombs in the Valley of the Dark Lords, looking for artifacts of powerful Sith; it’s classic RPG dungeon crawling.

Now these tombs are all closed up, buried in rubble.  There is no tomb raiding-adventure-fun here.  Instead, after a brief trip to the (mostly empty) Academy, you enter a Force cave and experience visions of your past (and possible future?).

Overall, it strikes me as way more philosophical than the first game.  The game is in someways less epic, and more about the personal growth and path of the Exile.

I made some mistakes with companion choices on Korriban.  Coming off the ship I took Atton and T3-M4 with me into the Sith Academy, then regretted not thinking to take Visas Marr, who has history with the Sith, having been an apprentice to Darth Nihilus (see menu screenshot above).

But Atton does have a cool orange lightsaber now, so that’s good.

When I saw a group of HK-50 assassin droids waiting for me outside the Academy, I switched HK-47 into my party because I thought it would be funny to watch HK droids snark and shoot at each other.  This was also a mistake, because HK-47’s programming does not allow him to fight other HK droids, and he becomes disabled for the fight, leaving my party outnumbered 3-2.

With the help of HK-47, I’ve now discovered where these HK assassin droids are being manufactured: Telos.  But apparently I can’t trigger the HK factory until later on in the storyline, which is kind of a bummer because it’s one of the things I’m most looking forward to doing for the first time with the Restored Content Mod.

The Force cave was very interesting.  First a warning: you can regenerate HP between encounters in the cave, but you will not regenerate Force points.  Use your Force powers purposefully.

I experienced several visions in the cave, going back through my past decisions that led to my choice to follow Revan, and then eventually my exile.  Many of the dialogue choices are great, and there’s a range of choices that really allowed me as a player to dig into Tyria Drace’s character and think about how she would answer.

Malak was kind of a dick. 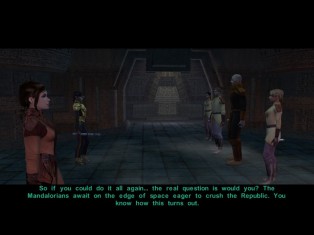 The climax involves a showdown with Force-Revan and an Dark Side version of myself (which was actually decently hard).

Later, back on the Ebon Hawk, I had a conversation with Kreia that revealed even more about these past events, and her role in them.  I still find Kreia totally obnoxious, but at least I feel like I’m getting some good story out of her character.

I forgot to check the total playtime when I saved, but it’s somewhere around 30 hours.  We just got a message from our Jedi contact on Onderon, so we’ll be returning there to head off a civil war!

2 thoughts on “Revisiting KOTOR II: (#6) Not your Revan’s Korriban”