Welcome back to Nar Shaddaa!  We have a new loading menu image: Visas Marr’s Sith master.

I had a few side missions to finish up, so I ran around the Refugee Sector and the docks for a bit.  Missions in KOTOR II are interesting and varied; my favorite are the puzzle quests, which require a little bit of creative thinking (although I think my character would prefer straight-up combat).

A puzzle for T3-M4 to complete on Nar Shadaa.

…but then I took a lightsaber to the knee?

One of the missions I completed (helping to reunite a refugee couple), rewarded me with the last piece I needed to create a lightsaber!  So I asked Bao-Dur to help me craft one.  I went with double-bladed, because I’ve already been dual-wielding with the Two-Weapon Fighting feat, and double-bladed just seems more badass than two single blades (plus requires finding fewer crystals to fill the upgrade slots).

Can’t I get a good guy color?

I’ve been playing my character, Tyria Drace, as a pretty straight-forward fighter type: doesn’t hesitate to start a fight, definitely doesn’t waste time doing stealth missions when she can just charge in.  Part of that is role playing; part of it is that as a gamer, I often favor the most direct path to my goal.

But I have definitely been playing her as light-side, so I was amused that the lightsaber crystal I randomly got is RED.  So now I have a red, double-bladed lightsaber, which is generally connected with Sith characters such as Darth Maul.  I will be changing that color as soon as possible!  There are several interesting colors that can be found in the game, but I’d settle for basic blue or green.

I also took the time to talk to all my companions, and explore some of their interactions on the ship.  Unfortunately, my newest members Mira and G0-T0 (my second evil droid after HK-47) did not take a shine to me at all; my conversation with Mira ended with her threatening to throw me out an airlock or something.  She also thinks I have a thing for Atton, which, let’s be honest, I totally do.  And T3 is pretty desperate to conceal where the Ebon Hawk has been, even resorting to shocking HK-47 to keep him from asking questions.

Playing pazaak with my companions on the ship. 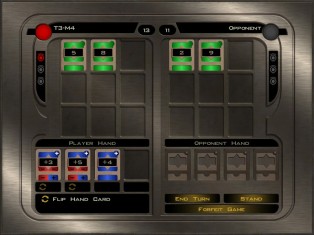 My conversation with Kreia was (for once) more helpful: it’s time for me to choose my prestige class!

I chose Weapon Master, fitting with my “fighter” focus on martial arts over skills or Force powers; I figured it would make things simpler for this playthrough, but it is perfectly ok to switch choose something that doesn’t align perfectly with your original class.

After making all these big decisions, I headed back to Telos to finish up a quest, then headed on to Onderon.  Again, no solid reason for choosing this planet next; it was mentioned in a previous quest, and seems close to Nar Shaddaa.  It’s not a particularly prominent planet in the EU (though it does appear in The Clone Wars).

We ran into some trouble during our arrival at Onderon, however.  On our approach to Iziz Spaceport, Republic forces attempted to detain us, and then fired upon us when we were uncooperative.  And so I got to play one of my favorite KOTOR minigames: manning the guns on the Ebon Hawk to shoot down the attacking fighters.  I managed it without a mouse, too!

We had to divert to one of Onderon’s moons and put down in a jungle clearing.  But it seems my character has been to this moon before, during the Mandalorian Wars.  And there are some memories here that Tyria Drace would rather forget…

We’re at 22 hours flat of total play time.  See you next time on the moon of Dxun!

Continue on the 5th part of the series here: Revisiting KOTOR II: (#5) Mandalorians are from New Zealand…or Dxun

One thought on “Revisiting KOTOR II: (#4) Why is my lightsaber red?”