We just took a family weekend trip to Deer Creek State Park in central Ohio and enjoyed some nice hiking with the fall color.  I took a bunch of pics of what I saw, so here’s another round of leaves for you guys to spot in your backyards and neighborhoods.  You can also use this wonderful website from the Ohio Public Library Information Network and the Ohio Historical Society to identify others. 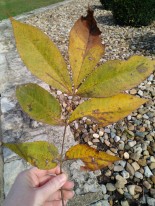 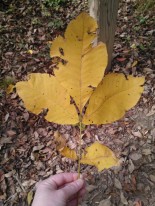 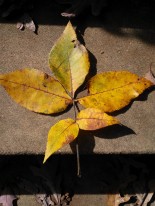 Pignut? hickory from my neighbor’s yard 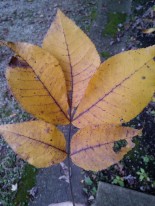 Pignut? hickory from my neighbor’s yard

Hickories have stunning yellow color in the fall and are also easily identified by their nuts.  Their leaves characteristically have 3 terminal leaflets that are larger than the basal leaflets.  There are several species of hickory to be found in Ohio, and I’ve done my best to identify these.

The shellbark (Carya lacinios) and shagbark (Carya ovata) hickory leaves are much larger than the pignut hickory (Carya glabra).  Shellbark typically have 7 leaflets, and are more commonly found in central/southern Ohio in the Ohio River valley.  Shagbark and pignut both typically have 5 leaflets and are found all over the state. 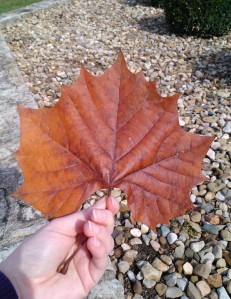 This one almost fooled me with its 3 symmetrical palmate lobes, but it’s not a maple; it’s a sycamore.  The lobes are so shallow they practically don’t exist.  These leaves are quite large and have nice fall color.

Palmate here means that the midrib of each lobe radiates from the same point, just as the fingers of a hand radiate from the palm. 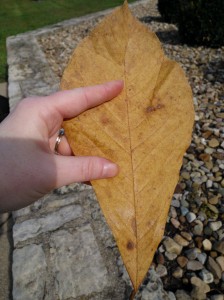 Also spelled “paw paw,” you may have heard of this tree from the American folk song about dear little Nellie “way down yonder in the pawpaw patch.”  This is another large leaf; the tree itself, though, is often found in the undergrowth rather than the canopy of the forest.  The leaves contain a natural insecticide, so are not very palatable to wildlife.  Pawpaw fruits, however, are said to be tasty, like a banana or mango.

Aside from the large size of the leaf, another good identifying feature is its very short stem; in this picture, I haven’t really cut off any of the stem at the bottom–that’s just all there is. 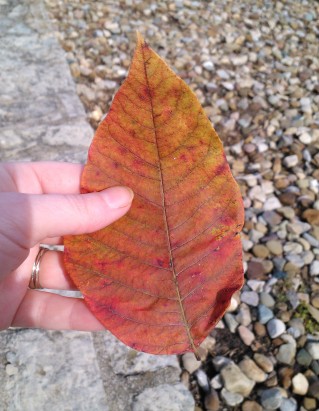 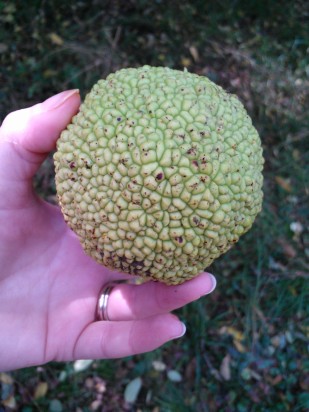 This was my favorite discovery of the weekend.  The Osage orange, also called hedge apple, is more native to the southern US, but has now been spread all over.  The leaf is mid-sized and widest near the base, with smooth edges and a tapered tip.

But the coolest thing is the tree’s fruit: it looks like a bumpy tennis ball.  I had literally never seen one of these before!  We came across a lot of these during our hikes, and my father-in-law was able to identify it as a fruit from his childhood in Virginia.  A little bit of Googling later, and the mystery was solved.