Despite predictions of rain, Sunday evening was a beautiful time to catch the Cleveland Orchestra from the lawn at Blossom Music Center.

I was even more excited because the program was called “Sci-Fi Spectacular!”  There’s nothing like hearing a world-class orchestra play the themes to my favorites movies (mostly, I mean Star Wars).  I first attended this set back in 2009, and it was just as great this year as it was then. 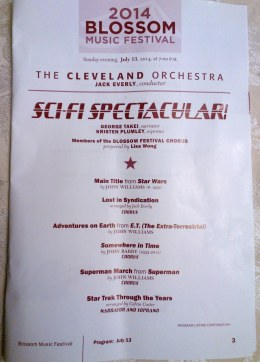 The evening featured Jack Everly as conductor–he was wonderfully enthusiastic, even he if couldn’t remember if Superman is a DC or Marvel character–and George Takei as narrator.  Being on the lawn, I was quite far away and couldn’t see him all that well.  But he was really wonderful; he spoke about how Star Trek: TOS used scifi elements to describe contemporary human issues, and even push the boundaries of TV as a medium.  The Starship Enterprise is a metaphor for the world, and so different characters represent different parts of the world, all working together in their mission.  Mr. Sulu was to represent all of Asia, so rather than go with a name that would be tied to a specific Asian country, like “Kim” or “Tanaka,” Gene Roddenberry chose the name of a sea near the Phillipines–Sulu–because a sea touches all shores.  You can tell he’s told that story many times, but it was really well done.

Takei spoke the intro to Star Trek (to boldly go, etc.), and also later recited the speech that Klaatu gives to the people of Earth at the end of The Day the Earth Stood Still.  Which basically boils down to: Earthlings, get your shit together, but phrased much better, and it resonates even today.

The program featured no less than SIX pieces by John Williams: Star Wars’ Main Title, End Title, and Duel of the Fates (with chorus!), Superman‘s Theme, and suites from E.T. and Close Encounters of the Third Kind.

Stormtroopers came out onto the stage at intermission; when the orchestra returned, Everly dismissed them, saying, “These aren’t the musicians you’re looking for!”  He also managed to sneak in a quick performance of “Mad About Me,” which you may know better as the Cantina Band song.  FYI, you can play this song on the jukebox in the cantina on Tatooine in SWTOR. 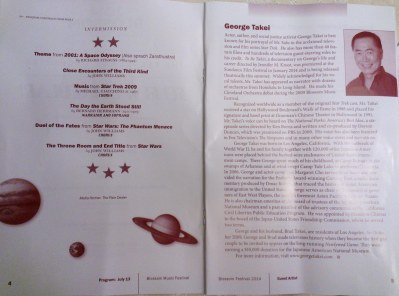 Star Trek did not get overlooked, either.  They played a medley of all the TV show themes (except Enterprise–I guess everyone wants to forget that theme), and some of Michael Giacchino’s wonderful scores to the two recent Star Trek movies.

Another fun treat was the conductor’s arrangement of various sci-fi TV themes, including Lost in Space, X-Files, The Jetsons, The Twilight Zone, and Stargate, plus some others I think I am too young to recognize.  They gave away a lightsaber to an audience member who could name at least 4 of the titles.

The program was rounded out with the iconic “Also sprach Zarathustra” featured in 2001: A Space Odyssey and the theme from Somewhere in Time, which is a movie I had never even heard of before.  The soprano Kristen Plumley also contributed her operatic voice to several of the pieces, even coming out in a Star Fleet officer’s uniform for the Star Trek theme.

And as the lights came down on Star Wars‘ End Title, the conductor’s baton lit up, and suddenly he seemed to be conducting with a lightsaber –a great ending to a great show!