I was back at Blossom over the weekend to see a joint performance of the Cleveland Orchestra and the Joffrey Ballet.  It was a wonderfully varied program, with precious little “classical” ballet.

They began with Interplay, choreographed by Jerome Robbins.  This was probably my favorite piece of the night, as it was light-hearted with colorful, fun costumes.  Next was Son of Chamber Symphony, to music by John Adams; it was pretty much what you would expect from a contemporary minimalist performance.  Then, we enjoyed the lovely Adagio set to music from Spartacus; it was choreographed on the two performers, and it showed.

After the intermission was the main event: Rite of Spring.

This legendary ballet was first performed in 1913, and it was so revolutionary it caused a riot in the theater.  Imagine a ballet having that kind of impact today!  Nijinsky’s choreography was a dramatic break from classical ballet, using jerking movements and primal stomping.  Joffery’s reconstruction is nearly true to the original, after years of research into the original costumes, scenery, and choreography. 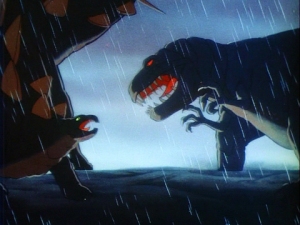 As for Stravinsky’s score, it was similarly revolutionary.  You have almost certainly already heard it: it was featured in Disney’s Fantasia, accompanied with scenes of prehistoric Earth and dinosaurs.  Honestly, I used to fast forward through good portions of these scenes, because they are fairly intense.  I loved dinosaurs when I was little (the stegosaurus was my favorite), so I did not relish watching them all die to frantic drumbeats.  I just tried to watch the clip on YouTube, and it still upsets me!