Well, it’s been a crazy week at work.  My whole department is moving into a new building…and that building isn’t really finished yet.

They originally told us we’d be moving on Thursday or Friday.  Then, Tuesday morning they told us to be ready at 8am Wednesday.  At 3pm on Tuesday, they said, “Are you ready to start now?”

Dude, I am frantically directing summer students as I pull open drawers and toss anything and everything I find into boxes.  Does it look like I am ready?

So, on the upside, all our stuff got moved promptly and quickly.  The normal office politics of bickering over who gets what space have (mostly) been resolved, so we were able to get our stuff to the right area.

We’re all excited for a new building of course; built-in Milli-Q systems, functional heat and air conditioning, and cold rooms that record the temperature accurately in 3 different ways.  But change is always hard.

I stole all these pictures from the internet, but they give you a good idea of my future lab. 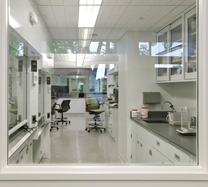 And some windows that make you feel like you’re in a fishbowl.

This building is designed with an “open” concept.  So, we have one big shared lab space, a “write-up” area instead of offices for staff and students, and lots and lots of windows.  There are almost no walls anywhere.  Even the doors and stairwells have windows in them.  The natural lighting will be great.

But, my God, this place is an introvert’s nightmare.  There is no place I can go to shut a door and recharge (save the bathroom and the stairwell).  There will be constant noise and motion.  There will be no privacy; I only have a small set of desk drawers that lock.

Also, have I mentioned that I am terrified of tornadoes?  Cuz I am.  Two weeks ago, we had a tornado warning (not uncommon in Ohio), and I busied myself in the lab, which was interior, on the ground floor, and had no windows.  (It also has lab benches to hide under if necessary.) Now I will have to find another place to shelter.  I saw a sign indicating an “Area of Refuge,” so I went to check it out and found this:

Survival of the fittest, at work in my office

The “Area of Refuge” is a tiny alcove in the stairwell (which, as I mentioned, has windows).  It looks to be maybe a square meter?  So maybe 2 people could fit in here, four if we are totally disregarding personal space.  There are 2 stairwells, and several floors to the building, so if we’re lucky, 24 people could survive a tornado by standing in these spots.  I don’t like my odds.

If the above photos look a little rough, that’s because they are still working on the building.  As the first labs moved their stuff over on Monday, we were informed that we don’t yet have a Certificate of Occupancy for the new building.  They kindly explained the implications.

Now that all our stuff has been efficiently packed and carted over, we cannot do any work in the new building at all.  No experiments, no set up.  We cannot even unpack anything.

So I’ll go in tomorrow, look at my stacks of hastily packed boxes in a shiny new lab, and likely go home again.  It’s not like I have weeks of backlogged PCR to run, or anything.