I hope everyone’s been enjoying the return of double-XP weekends on TOR.  My Jedi Knight has just finished Balmorra…and he’s almost level 40.  Everything is sooo easy right now, I’m ready for a bigger challenge.

Balmorra is one of my least favorite planets.  It’s ugly, has big ugly bugs, and it always seems like it takes forever to finish. 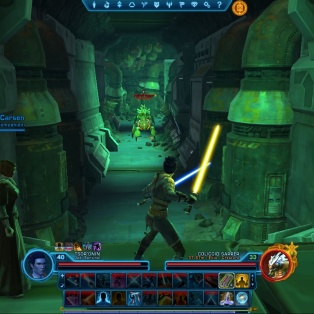 The storyline for Balmorra isn’t terrible.  It’s a planet in rebellion against the Sith Empire.  I particularly like the Imperial story, with Darth Lachris.  And I really like Doc as a companion; the Knight picks him up on Balmorra [edit: I retract this statement; turns out Doc is pretty obnoxious].  There are also some interesting side quests, including a puzzle quest in Camp Traken-4 on the Republic side.

But there are so many frustrating things about Balmorra.  All those stupid mountains mean that there are no shortcuts to anywhere.  Even on a speederbike, getting from place to place takes forever because you can’t go directly–you have to follow the twisty paths, go up and down lifts, etc.

Republic and Imperial characters don’t visit Balmorra at the same level.  For Imps, it’s the 3rd planet–and the first one with no Galactic Trade Network kiosk.  Repubs visit much later on.  That means that instead of having two separate areas on the same map, both sides use the exact same locations.  It gets really disorienting because many places seem so familiar, but you’ve come at them from a different direction, or things are placed slightly differently, so you think you know where you’re going but you don’t.

Taris is like that, too, but I feel more charitably towards Taris because it’s a holdover from KOTOR.  In any case, it’s on to the next planet for me!