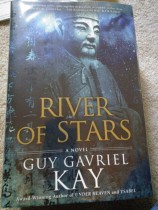 River of Stars is the latest by one of my favorites, Guy Gavriel Kay, known for his own historical fantasy novels and well as his work editing Tolkein’s unfinished writings, published as The Silmarillion.  It is set in the same location (a historical analogue of China) as his last novel, Under Heaven, but several hundred years (three dynasties!) later, so it is hardly the same Kitai we know.

River of Stars follows Ren Daiyan and Lin Shan, two characters that fit together in their “other”-ness: a clever soldier and a clever woman in a world of self-serving bureaucrats.  It is the story of their struggle to shape Kitai for the better, though their own lives don’t follow the flow of society.

This book is 632 pages, and I blew through it in a week.  This is typical of Kay’s work.  His prose is occasionally dense , but his characters and themes are so engaging and absorbing that you lose yourself in the story.

The opening of River of Stars is not nearly as immediately captivating as Under Heaven‘s.  Part One begins slowly, giving small sips of characters, key points in their backgrounds before the “real” story starts.  Kay spins a web of interactions; thankfully there is a dramatis personae (and a lovely map!).  Several main characters do not even meet until Part Two, 150 pages in.  For this reason, I would maybe not recommend this book for those who have never read Kay before.  But those who trust him implicitly and soldier on to Parts Three, Four, and beyond will be well rewarded.

The pacing of the rest of the book is handled very well, with forward jumps alternated with expanded scenes in all the right places.  The journey the reader undertakes has many twists; we are never assured that our heroes will make it out all right, and destiny is fickle.  Sometimes we can see those little “breaking points,” moments that define our path in life, as they happen, but sometimes they are only obvious in retrospect.

The ending is beautifully unsatisfying, and underscores a great theme of the novel: history and legend are always interwoven.  Although the historical truth of a person may be unknown or lost, sometimes fiction can present something equally true.  Or equally false.   That is for the reader to judge.

This book also has a lot of elements that will appeal to a wide audience:

Kay’s use of fantasy here is more extended than in Under Heaven, but it still confines itself to a kind of magical realism–I use the term loosely here, in that the fantasy elements are unalterably embedded in the folklore and spirituality in Kitai: vengeful ghosts, enchanting fox-women, lines of poetry never fading on a temple wall.

One of my favorite aspects of River of Stars was how emotionally involved I got in it.  Kay’s works have a huge influence on my own stories, and I can only hope to move readers in the same way.