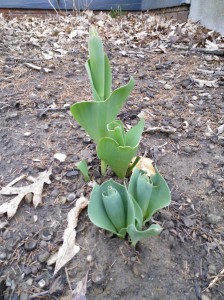 My tulips continue to sprout up despite Ohio’s bi-polar weather and some unseen visitors with a taste for crocuses and tulip leaves (deer top the short list of suspects).

I watched the pilot for “Defiance” this week, wondering if SyFy would be returning to its former glory (and preferably, its former name).  Sadly, I think that is unlikely.  This show is no Battlestar Galactica. And it’s certainly no Firefly.

If you missed the 2-hour pilot on Monday, don’t worry–it’s pretty much playing on repeat all week.  It introduces us to a tough father-daughter team of scavengers just trying to make a living on a post-alien invasion Earth.  They end up in the town that was St. Louis–now called Defiance, where humans and several species of aliens attempt to live together in peace.  But within a day of their arrival, there’s a company of fierce mecha-aliens threatening to wipe out the town, and a conspiracy is lurking in the shadows.

There was a lot of plot and action to this episode, and not as much character as I would have liked.  It started out nice and slow: father and daughter driving toward their next find, Nolan coaxing Irisa out of her teenage funk by getting her to sing “Jackson” with him.  A lovely scene.  Irisa’s voice-over narration at the beginning (and end) made me think she was meant to be the main character, but the show actually seemed to focus more on Nolan.

But other parts felt rushed; only an hour in the characters were fighting a major battle, and by the end of the show, a Romeo-and-Juliet subplot seemed fairly resolved.  I liked all the characters fine, but the only one I really loved is the snarky Indogene doctor.  I don’t really feel invested in anyone yet.  And I’m worried that this cast doesn’t have the same chops and depth of even “Revolution.”

The scifi aspects of the show were excellent.  I’m really looking forward to learning more about the various alien races, and how they came to attack Earth.  Also, the steampunk alien biker gang was a nice touch.  Overall, the show has the feel of a Western (and hence will draw inevitable unfavorable comparisons to Firefly).

Another interesting aspect is that Defiance is not just a TV show; there’s a game also, described as an “open world shooter” that will somehow tie in with the show.  I have no idea of the quality of the game, and no interest in playing it, but this could present an interesting problem if either game or the TV show tanks.

I’ll give Defiance another couple episodes to hook me; I am not one to give up hope for good scifi on TV!