Unless you live under a rock, you have probably heard that the movie adaptation of The Hunger Games is coming out this weekend.  Having read and loved the trilogy, I’ve been following the (extensive) press coverage leading up to the opening.

One aspect I am particularly excited about is the movie soundtrack.  There are two different discs being released, a score by James Newton Howard, and a compilation of songs entitled “The Hunger Games: Songs from District 12 and Beyond.”  I haven’t heard the score at all, but I listened to the samples of the compilation, and I’m very intrigued.  The concept was basically to imaging what Appalachian music, the music of District 12, Katniss’s home, might sound like in the future.  I am especially excited for The Decemberists’ “One Engine,” the Taylor Swift/Civil Wars ballad “Safe & Sound,” and the opening track from Arcade Fire “Abraham’s Daughter.” (Here’s a review of the compilation.)  I am unclear, however, exactly what role these songs from the compilation will play in the actual movie, whether they will be featured at all.

Music plays a key role in several parts of the Hunger Games trilogy.  Katniss inherited her father’s vocal talents, but since his death she rarely sings.  Her singing is significant at three different times in the books: her lullaby for Rue after covering her in flowers (I believe this song may be in the score), Peeta’s memory of her singing on the first day of school and realizing he loved her, and later on in Mockingjay when she sings a sad song (“The Hanging Tree”) for the camera, both evoking her state of mind and helping the people of Panem see a softer side of her.

There are two things I was hoping for on the Hunger Games soundtrack that are missing: Lenny Kravitz and Muse.  I think Lenny Kravitz is the absolute perfect Cinna, exactly how I pictured him in my head, and the image in the trailer of him putting the mockingjay pin on Katniss before she goes up to the arena gives me goosebumps.  It would have been cool for him to add his musical talents to the movie as well, and I think it would have worked thematically.  And I guess we are all sick of Muse after Twilight, but honestly I think their songs fit Hunger Games even better than Twilight.  The lyrics and mood of “Uprising” and “Resistance” always make me think of Katniss and Peeta.

On a side note: I am really disappointed at one of the stills that they have chosen to use to promote the movie.  I keep seeing it here and here and here.  I have never shot a bow in my life and even I can see that Katniss’s hand position is WRONG.  She looks like she is about to take her hand off.  If you want people to have confidence in your production, why would you release a photo where Katniss looks incompetent at what is supposed to be her best skill? 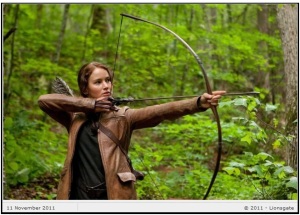 Edit (3/23/12): This photo came up today on failbook.com of all places (link).  Someone who has seen the movie mentions that this is her “tracking” pose; note that the string is not yet pulled back all the way, so she is not quite ready to shoot.  Fair enough.  And apparently, Jennifer Lawrence is a convincing archer as Katniss.  But I still think it was a poor choice for publicity picture.